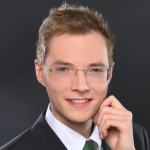 Uwe got his undergraduate degree at Karlsruhe Institute of Technology in Karlsruhe, Germany. While working in Martin Weides’ group, he wrote his bachelor’s thesis based on his work on a variation of transmon qubits called “gatemon,” which was presented during a Delft/Copenhagen collaboration in 2015.

Uwe then worked as a research assistant in Ioan Pop’s group, focusing on granular aluminum oxide. During his time at MIT, he will be working on experiential research for his master’s thesis.