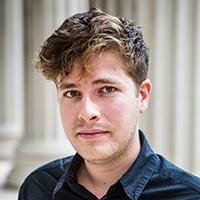 
Gabriel Orr Samach is a graduate fellow in the Engineering Quantum Systems group at MIT, where he researches novel superconducting qubit design and hardware-optimized algorithms for near-term quantum computers.

Prior to graduate school, Gabriel spent three years working as an Assistant Staff Scientist in the Quantum Information and Integrated Nanosystems group at MIT Lincoln Laboratory, specializing in the design, simulation, and measurement of superconducting qubits for next-generation quantum annealing systems.

Gabriel received his B.A. in Physics and Comparative Literature from Williams College in 2015, where he studied theoretical quantum foundations under the mentorship of William Wootters.

Gabriel is a recipient of the Lincoln Scholars Fellowship and holds a dual appointment at both MIT campus and Lincoln Laboratory.